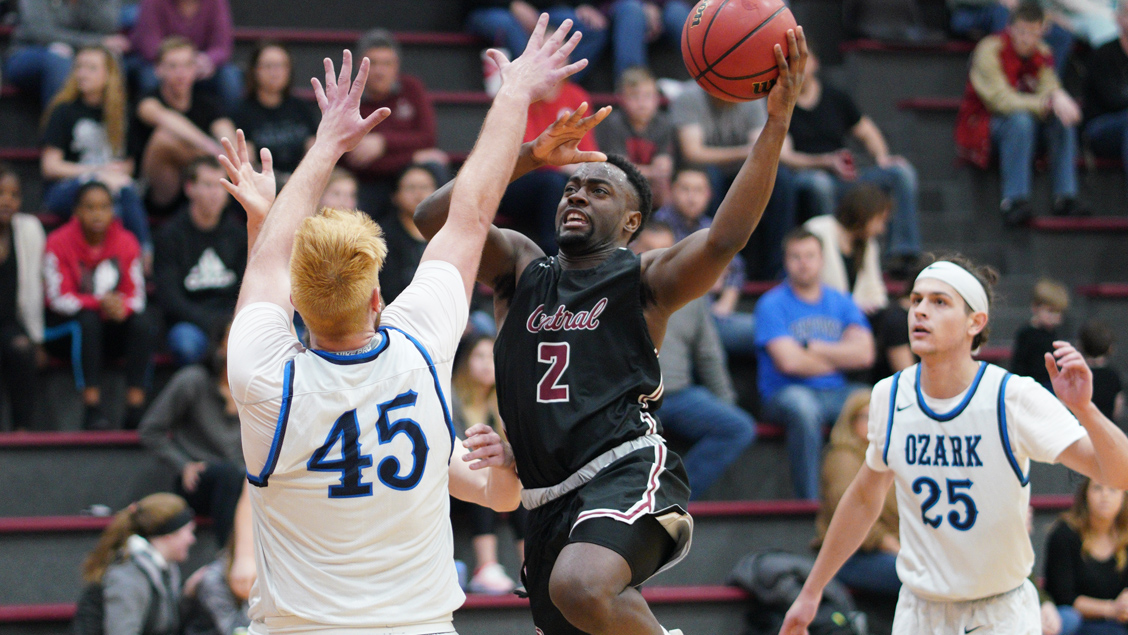 Central Christian College of the Bible put its offensive firepower on full display for the third straight day as it hit 11 first-half 3-pointers on its way to a 94-69 victory over Calvary University in the third place game of the Midwest Christian College Conference Tournament on Saturday.

The fifth-seeded Saints (13-14) trailed 17-14 after the Warriors' Ben Jones nailed a 3-pointer with 11:21 remaining in the first half. Capped by back-to-back 3-pointers from Cameron Brooks, Central Christian answered with an 18-0 run in three-and-a-half minutes of play to take a 32-17 lead against the tournament's second seed.

The Saints would go on to extend the lead to 21 a couple of times in the first half, including a 51-30 lead at the break, and cruised to their second straight third-place finish in the tournament.

Cameron Brooks scored 14 points on 3-for-4 shooting from behind the arc, while Caleif Gregg scored 13 points. Jaime Rodriguez chipped in another 12 points to go along with four steals, followed by Caleb Kendrick with 11 points.

Central Christian fought back from a 15-point deficit to force overtime in a 106-99 win over fourth seed Barclay College on Thursday in the quarterfinals. On Friday, they lost to top seed Ozark Christian, 103-95, in the semifinals after clawing their way back from a 22-point deficit.

The Saints started their comeback on Friday in the final 1:34 of the first half using an 11-0 run that culminated with an off-balance 3-pointer by Black right before the halftime buzzer to make it 56-47. They continued their run into the second half by scoring the first four points after the break, but again found themselves down 14 with 16:30 left in the game.

Another run, this time a 15-3 surge, tied the game at 68-apiece, then the Saints traded one-point leads with the Ambassadors for the next several minutes.

The Saints trailed by two with 24 seconds remaining, but two made free throws and a putback by Bryce Money on a missed free throw made it a six-point margin in a matter of one second.

Rodriguez led the way with 22 points after going 6-for-10 from 3-point range. Black scored another 20 points, while Gregg added 16 points, Rodrigo Nunez had 15 and Kedron Rollings another 11.

Bryce Money, who was named the MCCC's Most Valuable Player prior to the game, scored 33 points to lead all scorers.

Ozark Christian went on to win in the championship game of the tournament with a 78-77 victory over third-seeded Manhattan Christian.

The Saints begin Southwest Regional Tournament play on Thursday in Arlington, Texas, when they take on second-ranked and three-time defending national champion Randall University. Game time is set for 1 p.m.